Blues lovers everywhere, mark this date on your calendar, January 16-18, 2015. It is the 21th Anniversary of the Thredbo Blues Festival and if you know your music festiuvals there are very few that can lay claim to that sort of legacy. You know you’re onto a good music festival when the very people who form the backbone of it, the artists, call it their personal favourite. Clear and crisp mountain air, beautiful alpine surrounds, electric village vibes and soul soothing blues tunes make the Thredbo Blues Festival one of the top events to attend every summer.

This summer’s Thredbo Blues Festival is shaping up to be the biggest and best yet. some of Australia’s finest blues artists will perform over the weekend with headline act the legendary Russel Morris plus others including the iconic Jeff Lang, super-smooth Ray Beadle, the renowned Rick Price and more. With performances across both public venues and intimate dining environments, the festival will once again fill the Thredbo Village with the sounds of Blues music like it does every January. Thredbo’s mountain location is a spectacular picturesque setting to enjoy a diverse range of Australian Blues acts, with over 100 performers playing a fresh mix of Roadhouse, Chicago, R&B, Soul, Funk and Delta Blues. Click here for Program This program should be checked when purchasing tickets in Thredbo as we expect some changes closer to the event.

The blues is a vocal and instrumental music based on the use of the blue notes and a repetitive pattern that typically follows a twelve-bar structure, hence the term 12 bar Blues. It evolved in the United States in the communities of former African slaves, the missisippi delta, from spirituals, praise songs, field hollers, shouts, and chants. From blues music came great artists, such as Muddy Waters, BB King, Robert Johnson, John Lee Hooker, Buddy Guy, Bessie Smith, the modern day persona of Eric Clapton Stevie Ray Haughan, The Faboulous Thunderbirds and Robert Cray and others. The blues influenced later American and Western popular music, rhythm and blues, rock and roll, hip-hop, country music and pop songs. The known first recording of the blues was in 1895. 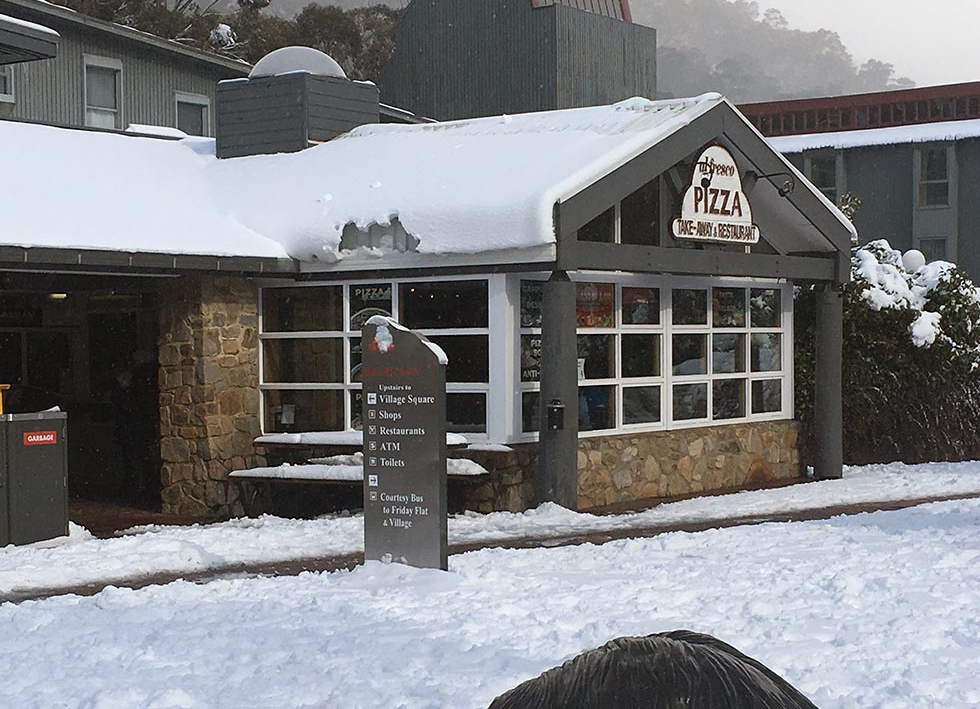 Restaurants
Located on the lower concourse of the Thredbo Alpine Hotel, this popular Italian eatery with an open kitchen is BYO. Traditional pizza menu, with all the usual favourites. Choose to eat in, take away, or arrange home delivery.
Thredbo Alpine Hotel
Thredbo Village
(02) 6457 6327
www.alfrescopizza.com.au 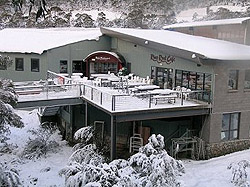 Restaurants
The Bavarian Beer Hall is renowned for it large selection of Local and Imported Beers, both on tap and bottled, from the extremely smooth, refreshing dark lager that is Kostricker to the more subtle pale gold lager with a herbal, creamy texture called Spaten Munchen and one of our favourite wheat beers, Franziskaner Hefe-Weissbier. Our Beers can cater to any palate.
Friday Drive
Thredbo Village
(02) 6457 6505
www.riverinn.com.au
[email protected] 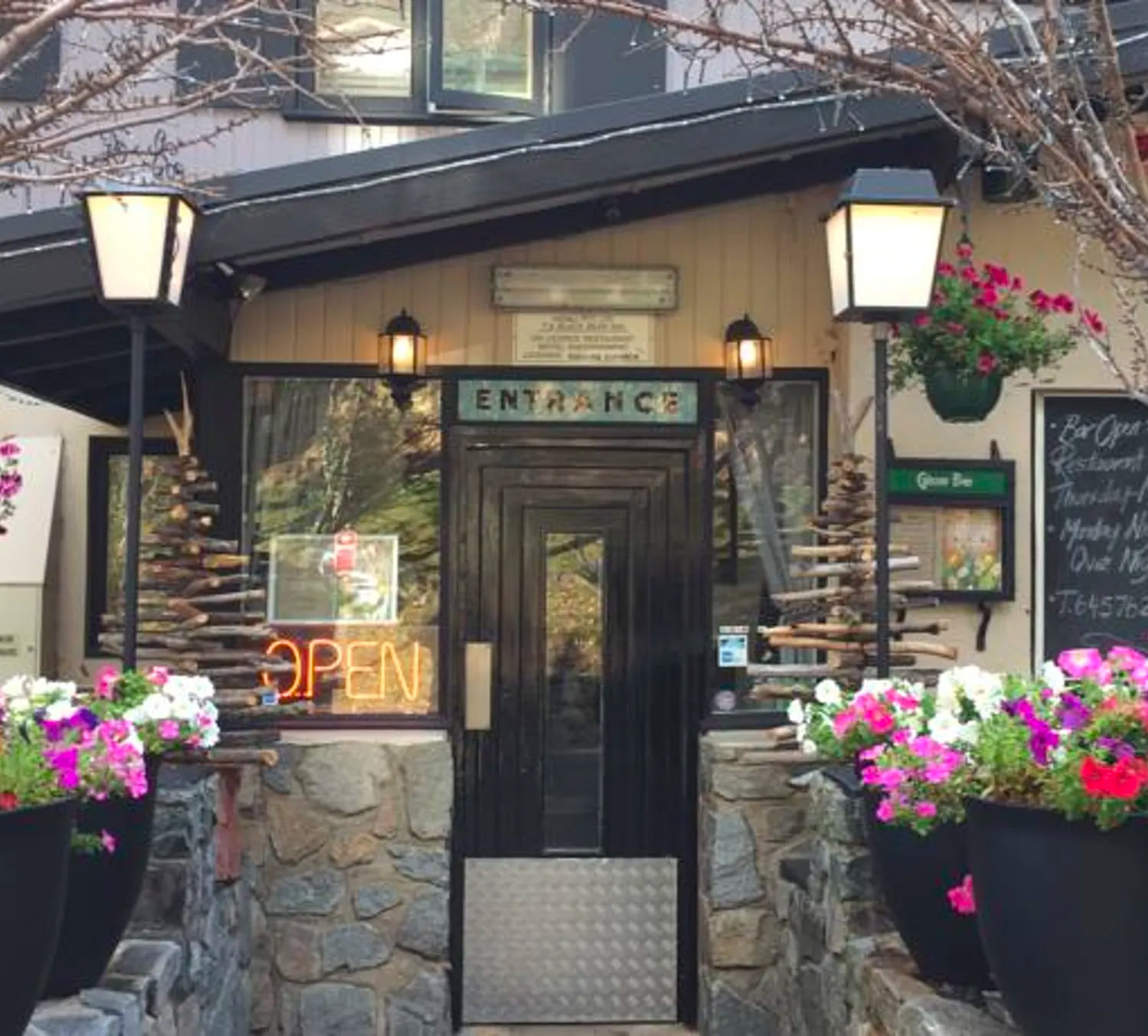 Restaurants
The Black Bear's restaurant atmosphere makes customers feel like they've been going there for years even if it's their first visit. The inviting restaurant was established in 1957 by Max and Emma Sommer, who have since retired but their German and Austrian recipes live on and their most famous creations are still for sale.
30 Diggings Terrace
Thredbo Village
02 6457 6216
www.blackbearinn.com.au 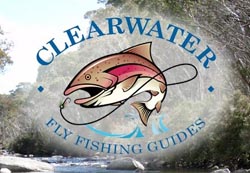 Activities
Try your luck at fly-fishing on the beautiful Thredbo River Wet a line and try your luck at fly-fishing. The Thredbo River is filled with fresh tasty trout just waiting to be caught. Learn to cast like a pro with Craig Daly from Clearwater Fly Fishing Guides. Lessons for all skill levels are available with equipment provided. Book at Thredbo Sports.
www.clearwaterflyfishingguides.com.au
[email protected] 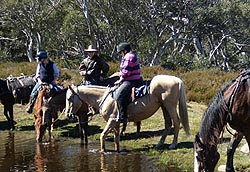 Activities
Have you ever dreamed of a horse riding holiday, exploring the wonders of the Snowy Mountains? We'll be your personal trail guide, your chef, your hosts. Find yourself in good company, enjoy our delicious candle lit three course meals, the cosy lounge and log fireplace. It's all part of this horseback adventure.
www.snowyriverhorsebackadventure.com.au 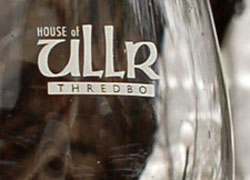 Restaurants
The House of Ullr Grill is a contemporary style restaurant offering relaxed casual dining, a selection of good quality steaks, chicken, lamb and seafood, all grilled to perfection. A childrens' menu is available and we are fully licenced offering a good range of beers, wines, spirits and schnapps.
Mowamba Place
Thredbo Village
02 6457 6210
www.houseofullr.com.au
[email protected] 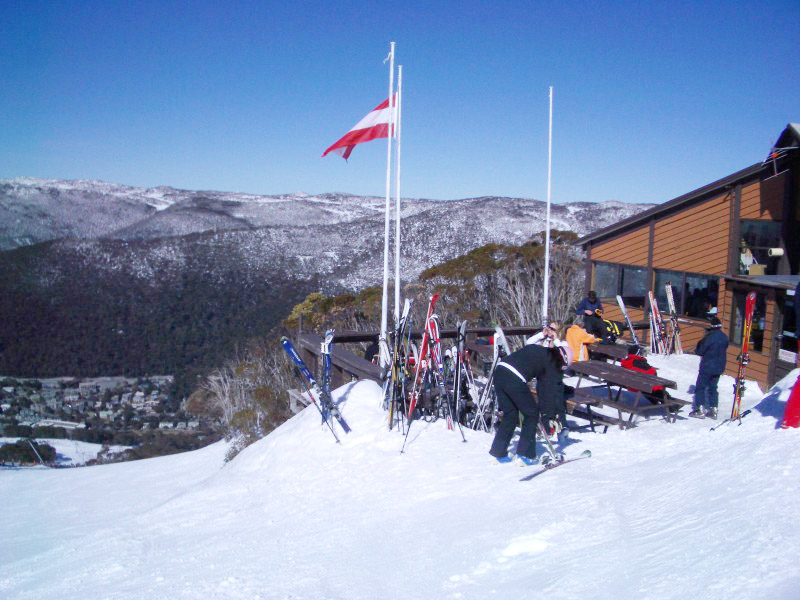 Restaurants
The modern a la carte Australian menu has a European influence and is accompanied by a large range of schnapps. Drop in for breakfast, cake, coffee or a long lunch, but remember you are still half way up the mountain and you have to get down to the village!
Crackenback Supertrail
Thredbo
02 6457 6099
www.kareelahutte.com.au 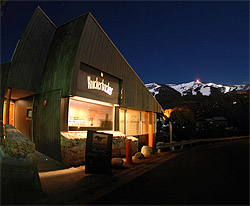 Restaurants
European mountain food, great beer, fantastic wine and, of course, the finest schnapps in the mountains! Meet for aprés in our bar as the sun sets over the resort. Enjoy one of our fine German beers on tap, a Wildbrumby schnapps, a Glühwein or a special coffee or hot chocolate.
Riverside Cabins
Diggings Terrace
Thredbo Village
(02) 6457 6844
www.theknickerbocker.com.au
[email protected] 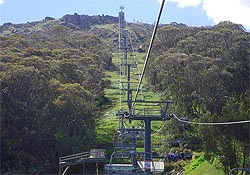 Activities
The scenic chairlift is open 365 days a year. The Kosciuszko Express Chairlift is 1.8km long and rises 560 vertical metres. The ride takes 15 minutes one way and offers spectacular valley views as you are lifted to the closest access point to Mount Kosciuszko. 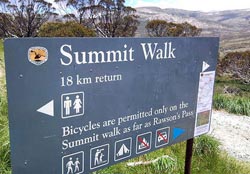 Activities
When you visit the Kosciuszko National Park a trip to the top of Australia is a must. Not only will you discover the unique wildlife, take in the amazing views and soak up the fresh alpine air, you’ll feel a sense of freedom and achievement like no other. Our guide will give you an informative talk on the unique flora, fauna, geological features and the history of the area. Those who reach the summit receive a Souvenir Certificate. 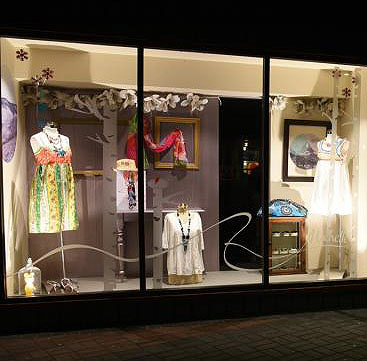 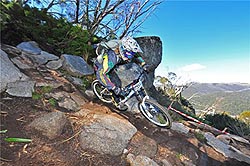 Activities
Where better to pedal about on a mountain bike than in the Snowy Mountains. You can hire everything you need in Thredbo or bring your own equipment. There is easy trail and village riding for all to enjoy or for those that get their thrill from an adrenalin rush, try taking the Kosciuszko Express to the top and riding the Thredbo Downhill trail.
www.mountainbiking.com.au 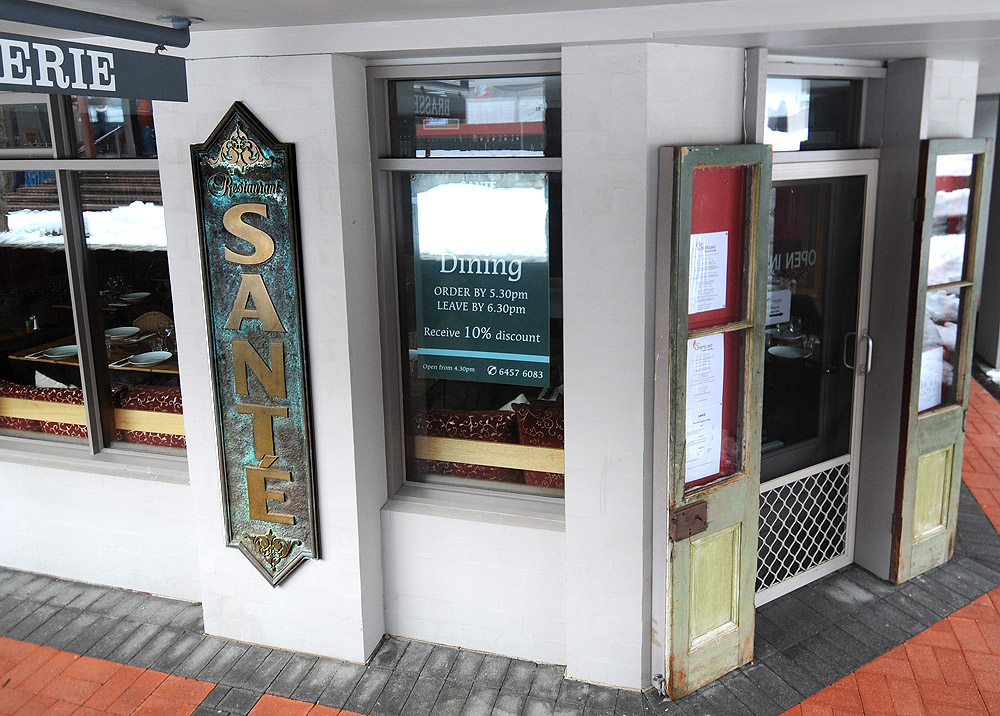 Restaurants
The Santé Churrasco Restaurant is located in the heart of Thredbo and offers a truly memorable alpine dining experience. The food, wine and welcoming service will quickly seduce you into forgetting about those aching muscles. The restaurant has an extensive wine list to enjoy.
Squatters Run
Thredbo Village
02 6457 6083
www.sante.net.au 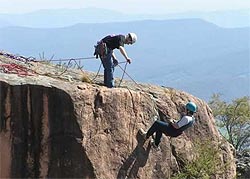 Activities
View the High Country from a different angle as you step over the edge and begin abseiling. The superb granite tors above Thredbo are a spectacular place to have a go at this exciting sport. Qualified instructors from Snowy Mountains Climbing School will show you the ropes and ensure that your experience is not only fun, but safe.
www.snowymtns.com 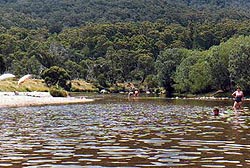 Activities
In Thredbo there are swimming options both inside and out. When the sunshine is out and the weather is warm, the best place to head is to the snowmaking ponds. Located at the northern end of the village, they are the perfect place to have a picnic and a dip. Both the Thredbo River and Merritts Creek have beautiful swimming holes located along their lengths. 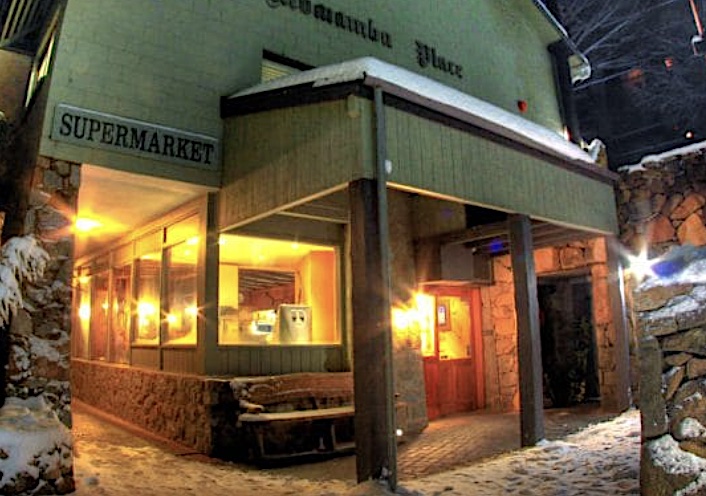 Restaurants
The staff are exceptionally friendly and work hard to create a relaxed atmosphere and provide the most memorable dining experience in the mountains for you. The cuisine is modern Australian and the T-Bar is famous for their char grilled steaks and their gourmet wood fired pizza. .
Mowamba Place
Thredbo Village 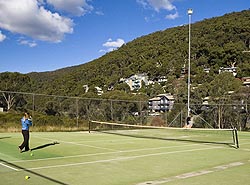 Activities
Work on your tennis skills at one of our four floodlit tennis courts Thredbo has four flood lit tennis courts that are available from 7am until 10pm daily in the summer months. Tennis racquets and balls can also be hired from Thredbo Sports. 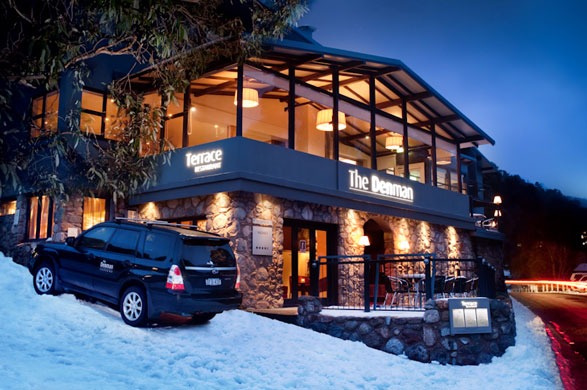 Hotels & Lodges
Perfectly positioned in the heart of Thredbo Village, the 36-room Denman Hotel is a warm and inviting boutique hotel. With well-appointed, cosy rooms, the much-loved The Terrace, historic Apres Bar and boasting breathtaking views of the mountain, The Denman Hotel is the ideal retreat designed to allow guests to simply relax and enjoy all that Thredbo has to offer.
Diggings Terrace
Thredbo
+61 2 6457 6222
www.thedenman.com.au 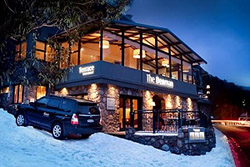 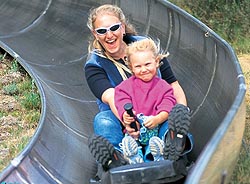 Activities
The Thredbo Bobsled is guaranteed to bring a smile to your face. With 700m of luge style track the bobsled twists and turns its way down the mountain whilst you control the speed with a brake on your cart. It’s great fun for all the family. To ride the bobsled on your own you must be 9 years of age or older and over 130cms tall. For the kids under 9 you double up with a responsible adult. 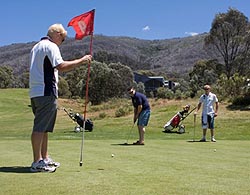 Activities
Your Ball goes further in Thredbo Play a round of golf on Australia's highest course. The nine hole, AGU rated course is bordered by the Thredbo river and has unique and challenging features such as the snake pit and Wally Wombat's House. Equipment hire and green fees can be paid at Thredbo Sports. In the cool of the evening sit for a bit beside the Thredbo river, and watch for platypus.

Activities
You can pump up at altitude and fine tune your muscles, take part in a fitness class, swim a few laps in the Olympic sized heated pool, play all your favourite games in the huge sports hall, have a hit of squash or climb the bouldering wall. For the kids (and young at heart) there’s Mission Inflatable, the blow up, floating obstacle course and the wicked waterslide, both sure to keep the good times rolling on. The centre is open every day of the year except Christmas Day. 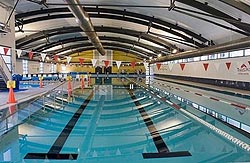 Activities
The Thredbo Leisure Centre has both a 50m and 25m heated pool, so when it's cold outside the pool is the place to be! The Leisure Centre pool also has a waterslide and Mission Inflatable, a slippery bouncy obstacle course strung across the pool. New for 2011/12 is the Torpedo Topple a 20m long inflatable snake that is certainly a challenge to master.