The History of Thredbo

Aborigines are thought to have started to occupy the Snowy Mountains several thousand years ago,  with four main tribes moving to the base of the mountains – the Yaitmathang, the Wolgalu, the Waradgery and the Ngarigo. There is archaeological evidence of Kamminga and others which suggests consistent Aboriginal residency of the Thredbo River valley could date back about 8700 years.

While at the time of European settlement of the south-eastern tablelands of NSW, Aboriginal tribes were not in permanent residency of the area now covered by the Kosciusko National Park, they occupied some of the lower lying valleys and foothills. Over time, the alps became a place for Aboriginal people for hunting and to congregate for ceremonies including annual feasting on the Bogong moths that migrated to the region around spring. Summer visits to the peaks of the Snowy Mountains by local Aboriginal tribes and those from further afield are well documented. The Aboriginal occupation of the alps is said to be “possibly the oldest highland occupation of any extreme climate mountain lands in the world by any Aboriginal peoples”

The origin of the name “Thredbo” has been attributed to the Aboriginal inhabitants of the Snowy Mountains (see The Cambridge Dictionary of Australian Places, Appleton 1992).  During the 1800s many places in Australia were named by the first European land-holders with their Aboriginal names which the settlers had learned directly from the local Aborigines. It is most relevant to note that Thredbo was referred to by name in the reports of alpine expeditions as early as 1840 by Stewart Ryrie and in 1852 by Reverend W B Clarke and  references to “Thredbo” are found in newspaper articles from at least as far back as 1852. References to Friday Flat are to be found  in newspaper clippings dating back to the late 1890’s where the area was used as a launching place for expeditions to the main range and Mt Kosciuszko. 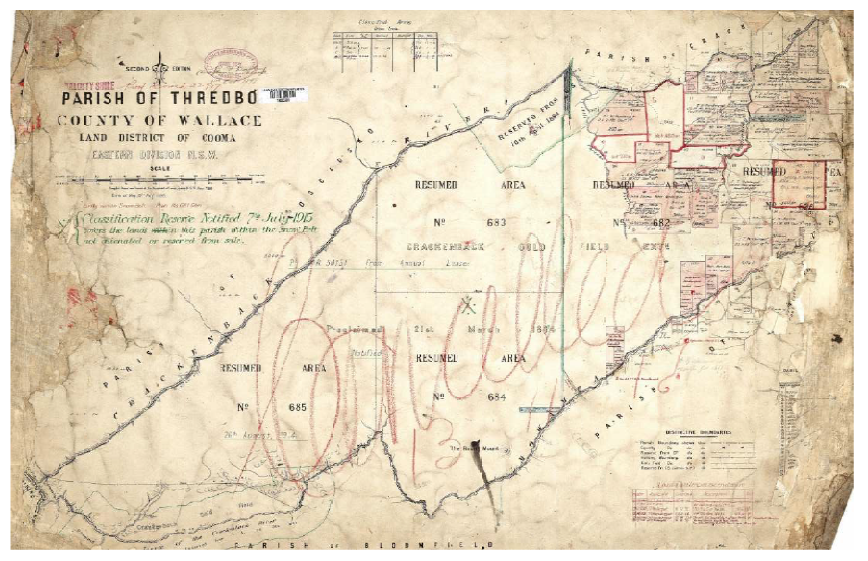 The first documented discovery of the Snowy Mountains was by a party led by Captain Currie and Major Ovens in 1823, though they viewed rather than ascended the peaks.

European settlement of the alpine area followed as graziers sought the benefits of the grasslands and permanent water supply. Grazing leases began to be established from the 1820s, including along the Thredbo River valley, continuing up until the mid 1900s when mounting concern about environmental impacts caused leases to be revised or revoked.10 The folklore surrounding the early grazing families was brought to the fore in Banjo Paterson’s poem “The Man from Snowy River”.

Credit for the first ascent of Mount Kosciusko goes to Polish-born Paul Edmund Strzelecki who in 1840 reached the summit, though there is some contention as to whether it was he or fellow country man John Lhotsky who did so first. Not long after this, Reverend William Branwhite Clarke was commissioned to undertake the first geological survey of the region which he carried out over a nine month period from 1851 to 1852. His investigations are detailed in his 1860 book entitled “Researches in the Southern Gold Fields of NSW” and his earlier letters.

Precipitated by Reverend Clarke’s reports of his survey, gold mining started in Kiandra in 1860 and soon after the Thredbo Rush commenced – a period when prospectors converged on the Thredbo River in the hope of collecting gold. It is understood from some media reports from the time that the pickings were sparse with the Rush being described as a hoax and potential prospectors warned about the dangers of the Thredbo River. The Rush was largely over by 1872 and grazing began to dominate again. Some of the gold diggers took up skiing and the first ski club was reputedly established at Kiandra in the 1860s.

The Thredbo River starts below South Rams Head mountain about 6 kilometres from where Thredbo village is now located, from there it flows in a generally North-East direction before merging with the Snowy River.

The River, though officially known as the Crackenback River, was regularly referred to as the Thredbo River in Reverend Clarke’s 1860 book, newspaper reports and other publications from that time onwards even though its name was not officially changed until 1976.

I many newspaper articles of the late 1800’s and early 20th century, up the Thredbo was a common term. 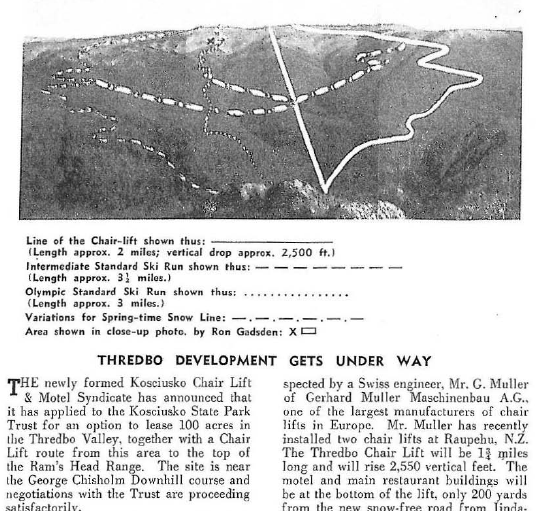 Between 1906 and 1909, the NSW Premier introduced tourism to the Snowy Mountains with the establishment of the Hotel Kosciusko, Yarrangobilly Caves House and the Creel-at-Thredbo. The latter was located close to the junction of the Thredbo and Snowy Rivers. It was this area that, at the time, appeared to be most commonly referred to as simply ‘Thredbo’.

In 1944 the Kosciusko State Park was established encompassing the Parish of Thredbo and surrounding areas.
In 1949 the Kosciusko Hydro electricity Scheme commenced, some 65 years after being originally proposed. With it came an influx of people, including many European immigrants accustomed to skiing, who increasingly took to the slopes. Those working on the scheme were among the founders of the Kosciusko Chairlift and Thredbo Hotel Syndicate responsible for the development of the Thredbo ski resort.

The Establishment of a Ski Resort at Thredbo

In the early 1950’s, a European worker engaged in the Snowy Mountains Hydro-Electric Scheme, Tony Sponar, became aware of the Snowy Mountains Electricity Authority’s proposal to construct the Alpine Way. Mr Sponar had set up a downhill skiing course for downhill races at an area known as the George Chisholm course located close to the current site of the present village. Mr Sponar believed that if access was provided from a proposed roadway known as the Alpine Way to a site suitable for the bottom station of a chairlift to the top of the escarpment on the Rams Head Range, the possibilities for future skiing would be viable. In September 1954 at the request of Mr Sponar, Sydney architect Eric Nicholls made enquiries of various chairlift manufacturers in Europe and in the United States for an installation at Thredbo. Mr Sponar, Mr Charles Anton, Mr Nicholls and Mr Geoffrey Hughes then considered the possibility of commencing a resort in the Thredbo Valley and they created a registered business name entitled Kosciuszko Chair Lift and Thredbo Hotel Syndicate.

The Kosciusko Chairlift and Thredbo Hotel Syndicate was formed in 1955 with a view to establishing Thredbo as a major ski resort. The founders of the syndicate saw benefit in including both “Kosciusko” and “Thredbo” in its name according to the account of one of its founders, Geoffrey Hughes. Hughes attributes himself with saying in April 1955: “Now that the Snowy is building the road up the Thredbo Valley there is a wonderful opportunity for a new ski resort in the Thredbo. It could be a goldmine so it is dangerous to alert others to it. We should get in first, register a Business Name and stake a claim on the best area in the valley.”

In the winters of 1955 and 1956 Messrs Sponar, Anton and Hughes made exploratory trips to and in the Thredbo Valley to identify the most suitable site for a resort. They made extensive investigations of the Rams Head Range escarpment, and of the area known as Dead Horse Gap. Finally they located a site at the bottom of the slopes, with a substantial water supply, being the site around which Thredbo Village has been developed.

The syndicate then entered into an option for a 99 year lease with the Kosciusko State Park Trust. From this lease, subleases were to be offered for a 25-year lease term with an option to renew for a further 25 years. Early in August 1958 a chairlift was opened, and the Thredbo Ski School commenced. In 1960 the financial affairs of the company improved as skiing became more popular in the Village. Under the Option for Lease, the syndicate was required to build a 100 guest bed hotel by 13 November 1962 to obtain its 99-year lease. The cost of such development was prohibitive for the syndicate. Accordingly, following negotiations, Lend Lease became the operator of the Thredbo Resort.